The National Parks and Wildlife Service (NPWS) of the Department of Arts, Heritage and the Gaeltacht, is urging members of the public to report illegal hare hunting. The NPWS is aware of increasing occurrences of the crime, particularly in the greater midlands area. The Irish hare is a unique sub species of the mountain hare and is a protected species under the Wildlife Acts 1976-2012.

A new scheme is under way to assist youth organisations and schools who are running TechSpace as Gaeilge to purchase digital media equipment.

The Abbey Theatre is to present Waking the Nation as part of the Ireland 2016 Centenary Programme, Fiach Mac Conghail, Director of the Abbey Theatre and Ministers Aodhan O'Riordáin and Heather Humphreys announced today. 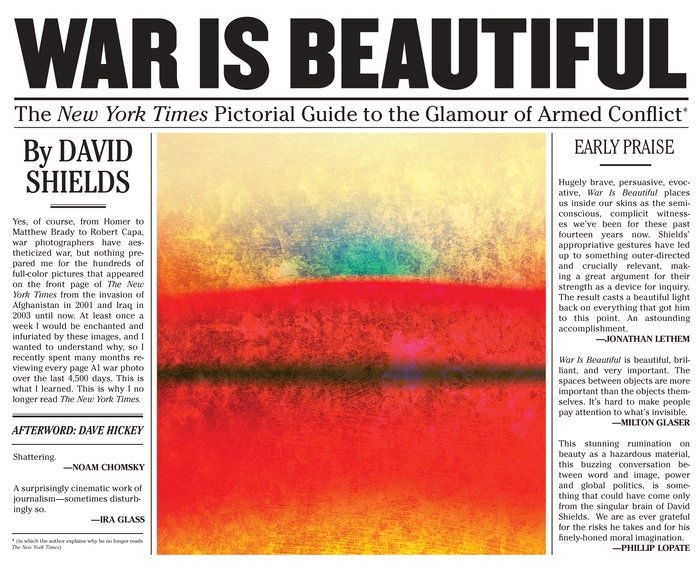 By David Swanson
While George W. Bush is apparently proud of everything he’s ever done, Tony Blair came dangerously close to facing reality this weekend when he admitted there were “elements of truth” in the view that the 2003 invasion of Iraq was the principle cause of the rise of ISIS (among other catastrophic results of that invasion).

By Ann Wright
Serving legal documents on high visibility persons who have been involved in international criminal acts is very difficult. However, the temptation of large honoraria for speeches in the United States tripped up a former Israeli Prime Minister who has been accused of war crimes for his involvement in the murders of ten passengers (nine were killed immediately and a seriously wounded passenger died after being in a coma for several years) on the Mavi Marmara in the 2010 Gaza Freedom Flotilla. 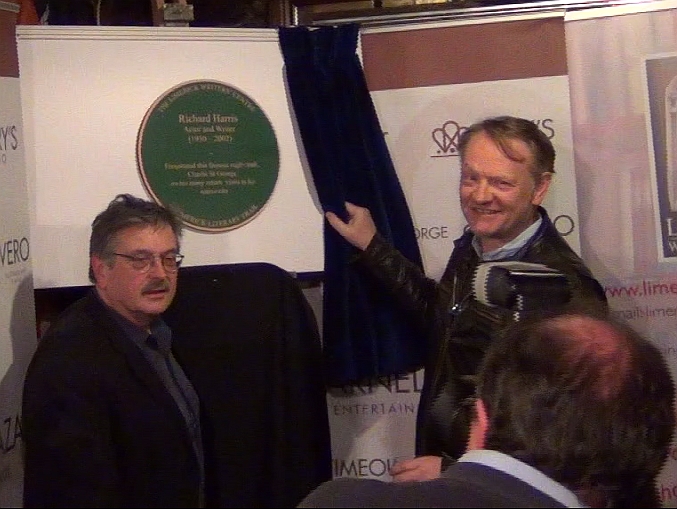 A plaque commemorating actor and writer Richard Harris has been unveiled by his son Jared at one of the late actor’s favourite bars in his birth city of Limerick.

Why I Oppose the Genocide Prevention Act
21 Oct 2015; posted by the editor - Opinion, United States

By David Swanson
Only a non-patriot or someone with a bit of respect for the Bill of Rights would have opposed the Patriot Act. 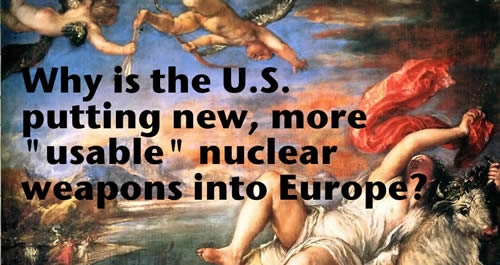 As the United States prepares to upgrade its nuclear weapons arsenal in Europe, protestors have launched a petition calling on the European governments to reject the upgrade of U.S. nuclear weapons.

The Past Decade in Syria in 5 Minutes
19 Oct 2015; posted by the editor - United States, Syria

By David Swanson
The accepted story in the United States of what’s happened in Syria is just that, a story told to make narrative sense of something completely un-understood.

Last week, WikiLeaks released the final text of the TPP’s (Trans-Pacific Partership) intellectual property rights chapter and and fightforthefuture.org, which is campaigning against the TPP, say it is “absolutely terrifying”.

What Became of the Vikings?
15 Oct 2015; posted by the editor - Opinion, United States

By David Swanson
When the United States is identified as an empire, albeit of a different sort than some others, it’s common to point to the fate of ancient Rome or the empires of Britain, Spain, Holland, etc., as a warning to the Pentagon or even to CNN debate moderators.

Read more...
Tags: Demise of the Vikings, US empire
0 Comments

By David Swanson
I know what you’re thinking. There is no draft. There hasn’t been a draft in decades. They’d let entire Central American nations immigrate, pay recruits six-figure salaries, and let robots fly the drones before they’d create a draft. Crackpot Congress members only bring up a draft as a supposed bank-shot manoeuvre for ending all the damn wars. Yeah, yeah, whatever. Your government has nonetheless decided that registering men for a possible draft (whether they like it or not, and even though nobody believes there will ever be a draft) is far more important than allowing them to register to vote.

When Peace Activists Met With the U.S. Institute of Peace
14 Oct 2015; posted by the editor - United States 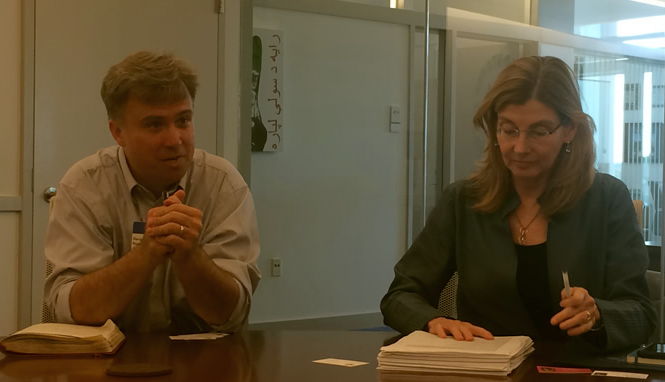 I was part of a debate on Tuesday that involved a larger disagreement than any exhibited at the Democratic presidential candidates debate that evening. A group of peace activists met with the president, a board member, some vice presidents, and a senior fellow of the so-called U.S. Institute of Peace, a U.S. government institution that spends tens of millions of public dollars every year on things tangentially related to peace (including promoting wars) but has yet to oppose a single U.S. war in its 30-year history.

Video and Audio of Pilots Who Bombed Hospital
11 Oct 2015; posted by the editor - United States

By David Swanson
There is video and audio. It exists. The Pentagon says it's critically important. Congress has asked for it and been refused. WikiLeaks is offering $50,000 to the next brave soul willing to be punished for a good deed in the manner of Chelsea Manning, Thomas Drake, Edward Snowden, and so many others. You can petition the White House to hand it over here.

By David Swanson
Alfred Nobel’s will, written in 1895, left funding for a prize to be awarded to “the person who shall have done the most or the best work for fraternity between nations, for the abolition or reduction of standing armies and for the holding and promotion of peace congresses”.

Lidl has announced that it is to become a Living Wage employer in Ireland, following a Forum on the Living Wage hosted last week by Minister Ged Nash and addressed by the Tánaiste in Dublin Castle.

The Nobel Foundation is facing a lawsuit against misappropriation of funds through violating the intended antimilitarist purpose of the Nobel peace prize.

The Incomprehensible Idea: What Opposing All Wars Means
06 Oct 2015; posted by the editor - Opinion

By David Swanson
The University of California is seeking to ban criticism of Israel. This is a widespread phenomenon in the United States, as attested by two new reports and cases like that of Steven Salaita, author of Uncivil Rights: Palestine and the Limits of Academic Freedom.

Culture Ireland's international culture programme entitled I Am Ireland, part of the Ireland 2016 Centenary Programme, was announced on Saturday 3 October by Minister of State Aodhán Ó Ríordáin with an event at Dublin's Smock Alley Theatre.

Billed as one of the largest start-up gatherings in the world, almost 400 Startup Gatherings are taking place nationwide between Monday 5 and Saturday 10 October in Dublin, Waterford, Cork, Limerick and Galway as well as the North East and North West.

This month guest readers at the October On The Nail Literary Gathering are Pádraig Mac Fhearghusa and US poet Brendan Constantine.

In the week that marks the 70th annual general meeting of the United Nations, author and peace activist David Swanson speaks about the role of the UN to WHDT TV in Boston.

Ruminations of an Afghan Girl Burning to Death in a Hospital Bed
04 Oct 2015; posted by the editor - Opinion

By David Swanson
Life is a very jumbled mixture. The pain of it, if you're awake and thinking, brings into your mind the happiest moments you can remember and transforms them into agony unless you resist bitterness with every drop of strength you have left, if not more. Physical pain makes clear-thinking and generous thinking more difficult, until death appears in front of you, and then the physical pain is as nothing.

By David Swanson
Americans may find Syria a bit confusing. David Petraeus, sainted hero, has proposed arming al Qaeda, organized devil. Vladimir Putin, reincarnated Hitler, is bombing either ISIS or al Qaeda or their friendly democratic allies, but he shouldn’t be because he’s against overthrowing the Syrian government, also run by Hitler living under the name Assad. Hillary Clinton, liberal socialist, wants to create a no-fly zone, but wouldn’t that make it hard to bomb all the scary Muslims? Wait, are we against Assad or the scary Muslims or both? Aaaaaarrrrgghh! How does this make any sense?

By David Swanson
When I wrote War Is A Lie in 2010 (second edition coming April 5th!) it was a condemnation of war, but not exactly a manifesto for abolishing it.