The Irish Anti-war Movement opposes the visit to Ireland by US President Donald Trump for many reasons but primarily because he is currently the world's top warmonger. The IAWM is calling on all Irish people who oppose war and racism to protest vigorously during his visit here. We call on those who wish to show their disdain with Trump to join the peace camp in Shannon Airport and the protests happening elsewhere this week including at the Spire in Dublin on Thursday evening, 6 June.

You Can Almost Count on Each New Mass Shooter Being a Veteran
02 Jun 2019; posted by the editor - Features, International, United States

By David Swanson
"He enlisted in the Virginia National Guard in April 1996, according to spokesman A.A. Puryear. He was assigned to the Norfolk-based 1st Battalion, 111th Field Artillery Regiment, 116th Infantry Brigade Combat Team as a 13B cannon crew member. He was discharged in April 2002 and held the rank of specialist at the time, the spokesman said. His records did not indicate overseas deployments." -CNN on latest mass shooter 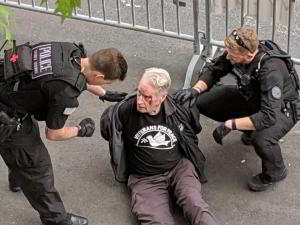 Two months ago, I heard a story. You heard it too, if you went anywhere near a television or a newspaper in the United States. The government of Venezuela needed to be overthrown because it wouldn't allow in humanitarian aid.

A group of seven US Veterans for Peace took part in a protest against the U.S. military use of Shannon Airport in Ireland on Sunday 17 March.

West Point Tries to Defend the Idea of a Just War
12 Mar 2019; posted by the editor - General, International