By David Swanson
Tom Engelhardt keeps churning out great books by collecting his posts from TomDispatch.com. His latest book, Shadow Government, is essential reading. Of the ten essays included, eight are on basically the same topic, resulting in some repetition and even some contradiction. But when things that need repeating are repeated this well, one mostly wants other people to read them—or perhaps to have them involuntarily spoken aloud by everybody's iPhones.

Brian Hayes, Fine Gael Dublin MEP, has been appointed as the Vice President of the European Parliament's Iraq Delegation.

Survival or Extinction: Part SixHead and Hand
20 Oct 2014; posted by the editor - Features

By Kevin Mugur Galalae
Social divisions are expressed in money but caused by the supremacy of vice over virtue. If the rules of society are fair, transgressors will be few and human effort will be channeled towards constructive ends rather than wasted on destructive pursuits, litigation and punishment. A fair society that channels human effort towards constructive ends makes optimal use of resources and prospers. The question then arises of how to attain such a society despite our human flaws. In economic terms, that point is the division of labor.

The Irish Neutrality and Peace Alliance (PANA) has organised a public meeting in Dublin, saying that much attention has been given by the media to those who supported World War One and scant coverage to those in opposition.

What Happens When You Talk With Americans About Drone Murders
17 Oct 2014; posted by the editor - Features, United States

By Joy First
Mount Horeb, Wisc
Bonnie Block, Jim Murphy, Lars and Patty Prip, Mary Beth Schlagheck, and I were at Rest Area 10 along I- 90/94, about 5 miles south of Mauston, from 10:00 am to noon on Thursday October 9, 2014. We had a model drone and a stack of flyers ‘6 Things You Should Know About Drones’ to help us in reaching the public and so they can learn more about what is going on just up the road at Volk Field Air National Guard Base. We were there in solidarity with others around the country as part of ‘Keep Space for Peace Week’ and global days of actions against drones sponsored by Code Pink, Know Drones, and other groups.

Published and respected poet John W. Sexton is holding a publick workshop and consultation in Limerick on Saturday 17 October from 11am to 1pm and 2 to 4pm, and on Sunday 11am to 1pm, at the Limerick Writers' Centre, 12 Barrington Street, Limerick.

The Irish Anti-War Movement is to hold a public meeting about why attacking ISIS will only make the situation worse.

A Different War-Is-Good-for-Us Argument
17 Oct 2014; posted by the editor - Features

By David Swanson
It seems like we just got through dealing with the argument that war is good for us because it brings peace. And along comes a very different twist, combined with some interesting insights. Here’s a blog post by Joshua Holland on Bill Moyers' website.

42m for Gaeltacht, the Islands and Irish language
16 Oct 2014; posted by the editor - Ireland

Almost €42m will be available to the Department in 2015 for Irish language, Gaeltacht and Island functions, in addition to a further €13.444m for An Foras Teanga (the North South Language Body). These are indicative figures which are subject to the Estimates being approved in due course and to the agreement of the North South Ministerial Council in the case of An Foras Teanga.

The Government has allocated €4 million as part of Budget 2015 to support a comprehensive national programme of commemorative events in the lead up to 2016 and the centenary of the Easter Rising. 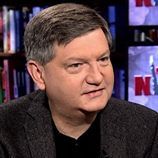 When New York Times report James Risen published his previous book, State of War, the Times ended its delay of over a year and published his article on warrantless spying rather than be scooped by the book. The Times claimed it hadn't wanted to influence the 2004 presidential election by informing the public of what the President was doing. But this week a Times editor said on 60 Minutes that the White House had warned him that a terrorist attack on the United States would be blamed on the Times if one followed publication—so it may be that the Times' claim of contempt for democracy was a cover story for fear and patriotism. The Times never did report various other important stories in Risen's book.

Around the Nightmare in 60 Days
15 Oct 2014; posted by the editor - Health, International

60 Days to contain Ebola
The World Health Organisation and the United Nations have warned that if the current Ebola outbreak is not contained within the next two months, the world will face an unprecedented crisis for which no effective plan exists.

The Tragedy of Modern Democracy
15 Oct 2014; posted by the editor - Features, International

By John Chuckman
I read and heard about Hong Kong’s students putting themselves at risk demonstrating for democracy, and my first instinct was sympathy, sympathy for their passionate idealism, but sympathy in another sense too, for their sad illusions. I ask myself, and it is not a trivial question, what is it exactly that they believe they fight for? Democracy has become such a totemic word, we all are trained to revere it, unquestioningly, almost the way 16th century people were expected to behave in the presence of the Host during Communion. But just where in the West do we see countries who call themselves democracies behaving in democratic ways, indeed where do we see genuine democracies? And if it is such an important concept, why should that be?

"Changes to the tax system will ensure certainty and stability for investors, and will make it easier to secure a strong flow of multinational investment and jobs in the coming years," Minister for Jobs, Enterprise and Innovation Richard Bruton said today.

Survival or Extinction: Part 5Discard Me Not
13 Oct 2014; posted by the editor - Features

Thousands took to the streets of Dublin on Saturday in protest against the imposition of metered water charges across the country. Video available from full story - click read more.

By David Swanson
Last year, public pressure played a big role in stopping US missile strikes on Syria. The biggest difference between then and now was that televisions weren't telling people that ISIS might be coming to their neighborhood to behead them. There were other, smaller differences as well: Britain's opposition, Russia's opposition, and the difficulty of explaining to Americans that it now made sense to join a war on the same side as al Qaeda.

By freepress.net
US President Obama made an unmistakable call for real Net Neutrality protections during a question-and-answer session in Santa Monica, California, when Obama made it clear that he wasn’t happy with FCC Chairman Tom Wheeler’s plan to allow discrimination online.1

Again the Peace Prize Not for Peace
10 Oct 2014; posted by the editor - International 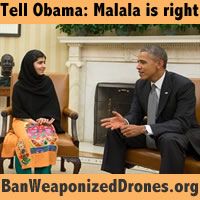 The Nobel Peace Prize is required by Alfred Nobel's will, which created it, to go to "the person who shall have done the most or the best work for fraternity between nations, for the abolition or reduction of standing armies and for the holding and promotion of peace congresses." The Nobel Committee insists on awarding the prize to either a leading maker of war or a person who has done some good work in an area other than peace.

Minister for the Arts, Heritage and the Gaeltacht, Heather Humphreys has outlined her long term plans for the Arts after responding to a private members' Bill in the Dail. Her comments and vision are below.

Challenging Drone Warfare in a US Court
08 Oct 2014; posted by the editor - United States

By Kathy Kelly
On October 7, 2014, Kathy Kelly and Georgia Walker appeared before Judge Matt Whitworth in Jefferson City, MO, federal court on a charge of criminal trespass to a military facility. The charge was based on their participation, at Whiteman Air Force Base, in a 1 June 2014 rally protesting drone warfare. Kelly and Walker attempted to deliver a loaf of bread and a letter to the Base Commander, encouraging the commander to stop cooperating with any further usage of unmanned aerial vehicles, (drones) for surveillance and attacks.

Thoughts of a Beheaded Head
08 Oct 2014; posted by the editor - Features

By David Swanson
Dostoievski once had a character imagine what a head would think if for some seconds it were aware of having been cut off by an executioner's guillotine, or if somehow it were aware for a full minute, or even for five minutes.

A newly reconstituted group created to provide direct access to Government for SMEs held its first meeting today, under the chairmanship of Minister for Business & Employment Gerald Nash.

The Government recently approved the drafting of the legislation to provide for a revised legislative framework to replace Registered Employment Agreements (REAs), following a judgement by the Supreme Court (McGowan and others v the Labour Court, Ireland and the Attorney General) which effectively made the registration of employment agreements invalid.

By Owen Boyden
Dublin City Council's  last night (6 October), debated and passed a motion calling for the immediate cessation of water fluoridation in Ireland. DCC, the largest Council in the country (per capita over 500,000 people), has now adopted an anti-fluoride position and will be calling on the Government to end Ireland's mandatory water fluoridation policy with immediate effect.

By David Swanson
The phrase "war myths" these days is generally taken to mean such nonsense as that war will make us safe, or civilians won't be killed, or surgical strikes will kill more enemies than they produce, or prosperity and freedom will follow war-making, etc. But I wonder whether "war myths" shouldn't be taken more literally, whether we don't in fact have a bunch of warmakers believing that they are Odysseus.

Open Enterprise Ireland and Invest NI have launched entrepreneurship awards for third  level students in The Student Entrepreneur Awards 2015  with a prize fund of €30,000 cash and €30,000 consultancy for enterprising students.

Survival or Extinction: Part 4Taming the Wolves
06 Oct 2014; posted by the editor - Features

By Kevin Mugur Galalae
Survival or Extinction: Part 4—Taming The Wolves—Summary
Paradoxically, this giant plan to “rob” the West and “give” to the Rest, so as to homogenize wealth worldwide, has required the globalists to concentrate wealth and control over money in fewer hands so it can be easily transferred to the desperate citizens of the developing world over the objections of the frightened citizens of the developed world.

The Irish Anti-War Movement (IAWM) is planning to stage a national protest at Shannon Airport over the continuing military use of the airport.

In its pre-budget submission, An Taisce says it has identified potential revenue of more than €100 million in pollution taxes. The suggestions from Ireland’s National Trust form part of a package of proposals that would, if implemented, copper-fasten Ireland’s reputation as a global first mover on environmental issues, the Trust states.

By An Taisce
Ireland’s bottom-of-the-class global environmental rating has been revealed in an international report published today by the World Wide Fund for Nature (WWF). The Living Planet Report finds that Ireland has the 14th highest ecological footprint in global resource consumption impact on a per capita basis, just behind Tony Abbott’s coal-burning Australia.